1 capsule to be taken 1 to 3 times per day or as advised.

Warning: Contains caffeine. Not recommended for children or pregnant women. High intakes of caffeine may cause insomnia and anxiety.

This green coffee bean supplement is unique, in that it also contains kelp, cinnamon, cayenne and chromium for that extra kick (equivalent to 420mg powder). 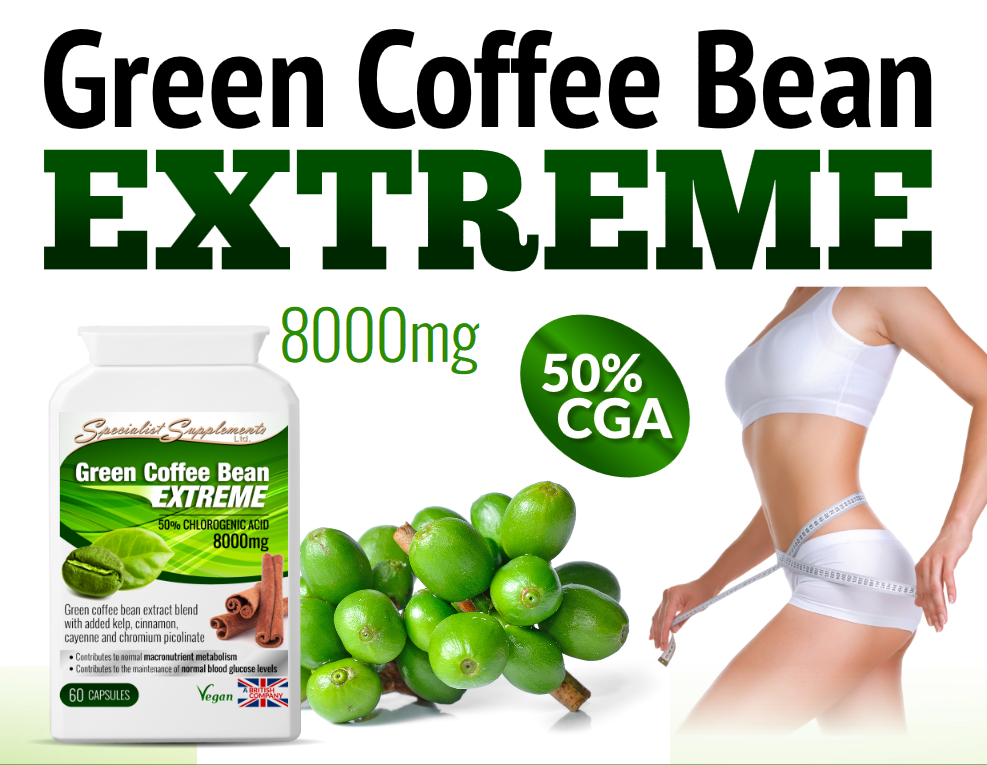 Green coffee beans contain a substance called Chlorogenic Acid, which is believed to be responsible for their weight loss effects. A nutrient largely destroyed during the  roasting process, CGA helps to slows the release of glucose into the body after a meal, thereby promoting weight loss. The caffeine also helps to release fatty acids from  fat stored in the body, while the chlorogenic acid and its related compounds then help the liver to process these fatty acids more efficiently. Scientific research has  demonstrated that natural, high-quality green coffee bean extract:

Green coffee bean extract can help to boost metabolism and burn fat at a faster rate by altering the way in which glucose is absorbed by the body. The chlorogenic acid  helps regulate metabolism, while the caffeic acids act as stimulants and thereby help to boost energy (but, unlike normal coffee, there is considerably less caffeine – so you  benefit from higher energy levels without the jitters)!

Green coffee bean extract has been found to have a stronger antioxidant effect than other established antioxidants like green tea and grape seed extract. The chlorogenic  acid helps to neutralise free radicals and addresses the problem of hydroxyl radicals, both of which can lead to cellular degeneration if left unchecked. Compared to green  tea and grape seed extract, green coffee bean extract is twice as effective in absorbing oxygen free radicals.

Cinnamon can support weight management in a number of ways. For example, it has the unique ability to imitate the activity of insulin in the body, thereby helping to  regulate blood sugar levels so that excess fat does not build up and the body is less likely to experience hunger surges and cravings. But it’s not only sugar metabolism  that cinnamon has the ability to alter; it also positively affects the body’s ability to use its carbohydrate storage, so that carbohydrates are not converted into excess fat. The consumption of cinnamon itself, also causes a metabolic reaction . Similar to when you eat hot peppers, the presence of cinnamon in the body speeds up the metabolism because it takes a little extra energy to metabolise. This boost in metabolism allows the body to burn more calories and therefore assists with weight loss. We  have used cinnamon extract in Green Coffee Bean EXTREME (a concentrated form of the actives in cinnamon powder).

Kelp is a natural superfood packed with trace minerals, amino acids, vitamins and minerals. As such, it provides a broad spectrum of nutrients, which help to ensure the  body is working optimally (which is essential for any successful, long-term weight loss program). For example if your digestion is compromised, your metabolism could be affected and weight loss hindered.Amongst its wide array of nutrients, kelp is one of the best natural sources of iodine and it can provide adequate levels to stimulate a sluggish thyroid and encourage a healthy metabolism . An efficient metabolism is key for maintaining ideal body weight and iodine is the catalyst that can jump-start  metabolic processes. The thyroid gland absorbs iodine, which is usually obtained by diet or supplementation, and subsequently releases the hormones that control  metabolic function. We have used kelp extract (a concentrated form of the actives in kelp powder). Kelp also contains

alginate, which can help to keep you feeling satisfied – ideal for slimmers, who often experience hunger, cravings and appetite control issues in the early stages of weight loss.

And finally, kelp is rich in

fucoidans (molecules found exclusively in seaweeds). These support both the immune system and cell function. We have used kelp extract in Green Coffee Bean EXTREME (a concentrated form of the actives in kelp powder).

The red cayenne pepper has been shown to curb appetite , stimulate circulation, speed up metabolism and help the body to burn extra calories – cayenne can increase the metabolic rate by as much as 25%. When you eat a spicy food such as cayenne, it causes your body’s temperature to rise. Your body then goes into a “cool down” mode,  which results in the burning of calories
.
Capsaicin is the main active ingredient in cayenne pepper. Research has shown that it is a thermogenic agent (i.e. one which helps speed up your metabolism and  decrease your appetite). Increasing metabolism helps to burn fat faster, which in turn enhances energy production – ideal when levels of physical activity increase as part of  an exercise program to support slimming efforts! We have used cayenne extract (a concentrated form of the actives in cayenne powder).

Chromium is a trace mineral that enhances the action of insulin in the body, which is how it plays an important role in metabolising sugar and maintaining normal blood  glucose levels . The body also needs chromium for healthy protein and fat metabolism. Chromium picolinate, the most absorbable form of chromium, is one of the hottest  slimming supplements around. It has long been recognised as a natural remedy for elevated blood cholesterol and triglycerides, but it is now more popular for its weight  loss effects. Aside from the benefits mentioned above, this is largely because studies have shown that this mineral can help trim fat and build muscle
.
In one study conducted at Bemidji State University (Minnesota, USA), one group of athletes took 200mcg daily, while another group took a placebo. After 6 weeks, the  athletes gained 44% more lean body mass, whereas the placebo group was only 7%. Similarly, overweight volunteers at San Antonio weight loss centre (USA) were given  chromium supplements or a placebo for an average of 72 days, without any particular diet or exercise regimen. The volunteers taking the supplements lost an average of  4.2 fat lbs and gained 1.4 lbs in lean mass. While they were taking the placebo, their body changes were negligible. About 90% of the population does not get enough  chromium from food (food sources include broccoli and shellfish). To make matters worse, the high-sugar diet typical of many Brits, can increase the elimination of  chromium from the body. Many researchers believe that chromium deficiency may be a contributing factor to the increase in Type II diabetes cases. New research has  examined the role that chromium can play in helping to reduce food intake, suppress appetite and minimise food cravings

There are no reviews yet.

Be the first to review “Green Coffee Bean” Cancel reply