Turmeric root powder has been long used by Ayurvedic medicine as a basic “heal all” and anti-inflammatory. The benefits of turmeric and its active ingredients (including curcuminoids) have recently been recognised in the Western world after much TV, magazine and radio coverage. There are a couple of thousand published studies supporting the beneficial effects of turmeric.

1 capsule to be taken 1 – 3 times per day, with food or as advised by a health practitioner.

Turmeric root powder has been long used by Ayurvedic medicine as a basic “heal all” and anti-inflammatory. The benefits of turmeric and its active ingredients (including curcuminoids) have recently been recognised in the Western world after much TV, magazine and radio coverage. There are a couple of thousand published studies supporting the beneficial effects of turmeric.

Ideal as an immune system booster, as well as for use during any exercise programme, by older adults and anyone looking to support hormone, bone and joint health plus all round well-being. Can also be used for liver, digestive and circulatory system health.

Turmeric is perhaps most commonly associated with its anti-inflammatory actions in the context of its potential health benefits. Inflammation is the body’s natural response to  njury or infection, often causing localised redness, swelling, pain or heat.
It may also cause loss of function of the involved tissues. Acute inflammation is typically a  protective and localised response to infection or injury. It is designed to heal the body and restore normal tissue function. Inflammation of the joints, including stiffness and  swelling are common symptoms of arthritis. If inflammation persists for a prolonged period of time, it becomes chronic inflammation.

Chronic Inflammation – The Cause Of many Problems

Chronic inflammation can be the result  of an infection, autoimmune reaction or allergy. Studies have shown that curcumin, a compound in turmeric, may reduce inflammation in the body.
Curcumin is a polyphenol. As well as better regulation of inflammation, its other potential benefits include fighting the effects of oxidation (antioxidant activity), better cell signalling, more stable blood  sugar and fat levels, and improved brain levels of the omega-3 fatty acid called DHA (docosahexaenoic acid).

The anti-inflammatory and antioxidant effects of curcumin  have also been associated with improved regulation of blood pressure and decreased risk of several types of cardiovascular disease.
However, while once only focussed  on the anti-inflammatory benefits, studies on turmeric intake now also include its potential for offering detoxification support and improving cognitive function, blood sugar  balance and kidney function, as well as lessening the degree of severity associated with certain forms of arthritis and certain digestive disorders.
Turmeric includes three  different curcuminoids: curcumin, bisdemethoxycurcumin and demethoxycurcumin. It also contains volatile oils like tumerone, atlantone and zingiberone.

Many Benefits of Turmeric

It is also used for headaches, bronchitis, colds, lung infections, fibromyalgia, leprosy, fever, menstrual problems, itchy skin  and recovery after surgery. Other uses include depression, water retention, worms, urinary bladder inflammation and kidney problems.
The dried powdered spice that many  people use in cooking comes from the root (rhizome) portion of the plant – Curcuma longa. The unprocessed form of this root bears a strong resemblance to ginger  root, and that resemblance is not a coincidence! Turmeric and ginger are both plants belonging to the Zingiberaceae family.
With our Turmeric supplement containing both it adds to the power of controlling inflammation and boosting immunity

Ginger is the knotted, beige-coloured root (or rhizome) of the Zingiber officinale plant. Historically, it has a long tradition of being effective in alleviating symptoms of  gastrointestinal distress. In herbal medicine, ginger is regarded as an excellent carminative (a substance which promotes the elimination of intestinal gas) and intestinal  spasmolytic (a substance which relaxes and soothes the intestinal tract).
Modern scientific research has also revealed that ginger possesses numerous therapeutic  properties including antioxidant effects, an ability to inhibit the formation of inflammatory compounds and direct anti-inflammatory effects.
This is because ginger contains  potent anti-inflammatory compounds called gingerols.
These substances are  believed to explain why so many people with osteoarthritis or rheumatoid arthritis experience  reductions in their pain levels and improvements in their mobility when they consume ginger regularly.
In two clinical studies involving patients who responded to  conventional drugs and those who didn’t, physicians found that 75% of arthritis patients and 100% of patients with muscular discomfort experienced relief of pain and/or  swelling 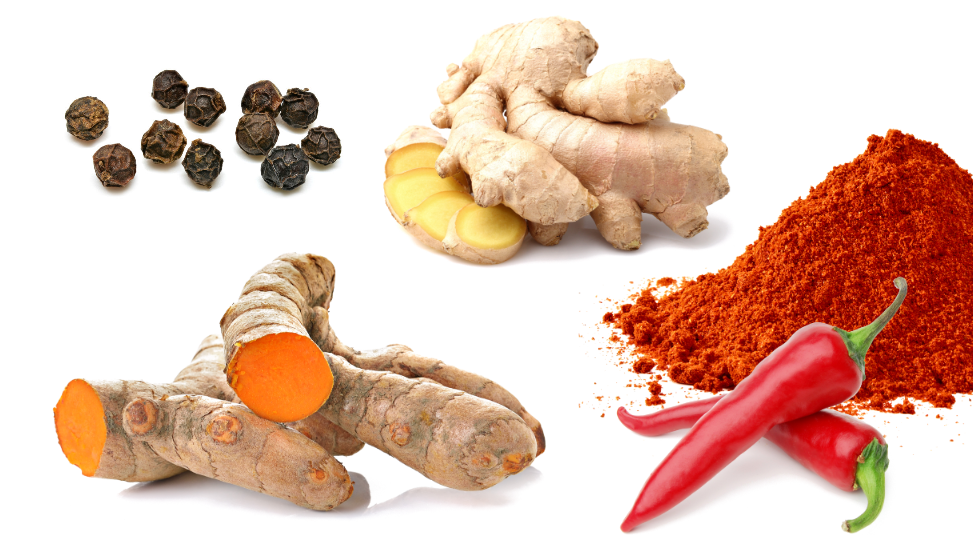 Regarded by most herbalists as the purest and safest stimulant known, cayenne opens up every tissue in the body to help increase the flow of blood and therefore improve  circulation. It is also used in the treatment of poor digestion, as a carminative, to increase gastrointestinal secretions and as an anti-spasmodic for the relief of pain.
This is because cayenne pepper contains capsaicin , which gives the spice its heat and has analgesic properties.
The pain-reducing effects of capsaicin are due to its  effect on substance P, which is a chemical released in tissue damage that alerts the body to injury. Long-term or repeated exposure to capsaicin can reduce substance  P in an area, leading to a diminished pain response.

Piperine is the alkaloid responsible for the pungency of black pepper and long pepper. It increases thermogenic activity in the body and is therefore often included in weight  loss formulas – thermogenesis is the way of developing cellular energy and this results in an increase in the metabolic rate of the body.
However, piperine has been  included in this formula because of its ability to potentiate the absorption of the other herbal actives. In particular, it boosts the bioavailability of curcumin.

Vitamin B6 contributes to the normal function of the immune system, the regulation of hormonal activity, normal cysteine synthesis, normal energy-yielding metabolism,  normal homocysteine metabolism, normal protein and glycogen metabolism and the reduction of tiredness and fatigue. Our turmeric supplement contains B6 vitamin in dequate proportions