Omega 3-6-9 Oils provides a carefully blended combination of these healthy fats (high in EPA and DHA), balanced to optimal levels of each to ensure adequate intake of the essential polyunsaturated and monounsaturated fatty acids.

Omega 3 and 6 fatty acids are essential and must be sourced from the diet. Omega 9 fatty acid is not considered essential (as it can be manufactured by the body), but its inclusion in the diet has been associated with a range of health benefits.

This supplement is derived from sunflower seed oil, flaxseed oil and fish oil (the best source), plus added vitamin E. A high-strength formula (1000mg) and in an easy-to-swallow gel capsule form.

When most people think of fats, they think of foods that will lead to weight gain and deterioration of health.However, while some fats (particularly saturated) should be avoided, there are others that are essential to maintaining good health. These “good” fats are typically missing from the average Western diet. Scientists have broken down  two types of polyunsaturated fats into what are called Omega 3 and Omega 6 essential fatty acids (EFAs). It is vital to include these acids (good fats) in our daily diet, because the body cannot produce them itself.

1 capsule to be taken 2 to 4 times per day, or as advised. To be taken 30 minutes before meals.

Warnings and allergy advice:
Contains fish.
People with epilepsy should consult their doctor before taking this food supplement or changing their diet. 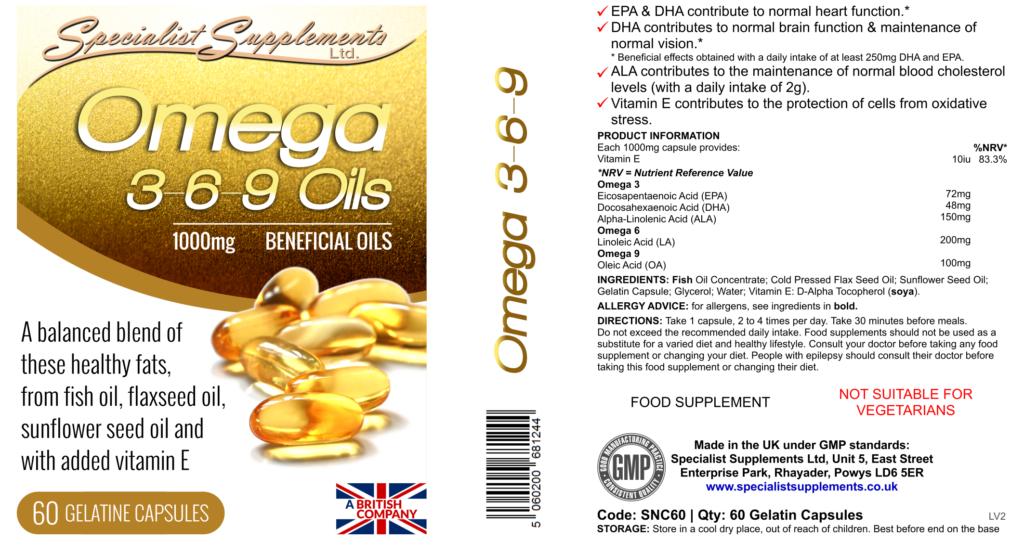 Flaxseed is one of the best sources of Omega 3 fatty acids. In addition, the oil is a rich source of lignans – a type of fibre that is changed by friendly bacteria in the gut into  compounds that can help to fight against disease.
Lignans can also help to modulate hormone levels and relieve some of the symptoms often associated with menopause, such as hot flashes and yeast infections due to vaginal dryness. Flaxseed oil is also used to support symptoms of premenstrual syndrome, which may be caused by hormonal imbalance. Relatively recently, yet more good  news was discovered about Omega 3 rich flaxseed oil – Omega 3 fatty acids can lower blood levels of the protein homocysteine . Elevated levels of this protein are  believed to be a major risk factor for heart disease. Bodybuilders also claim that flaxseed oil supplements increase their stamina and assist with faster recovery after  workouts. Flaxseed contains a natural antioxidant , which could explain why it helps tired muscles recover more quickly. In addition, its anti-inflammatory effect can also help  to reduce muscle soreness.

It is now generally accepted that oily fish (the best source of Omega 3) is good for – amongst other things – the heart, arthritis, skin disorders and some cases of chronic  headache . In Greenland, where much oily fish is eaten, heart disease is scarcely known. By stark contrast, in Britain an average of 200,000 people die of heart disease  each year. Western affluence diseases from a diet of excess saturated fat (from meat, dairy products etc), may be reduced by even modest amounts of oily fish. The main  components of fish oils are docosahexaenoic acid (DHA ) and eicosapentaenoic acid (EPA).

DHA is abundant in oily fish and is found in high concentration in the grey matter of the brain and the retina of the eye. It is also instrumental in the function of brain cell  membranes, which are important for the transmission of brain signals. Essential for normal brain and eye development, DHA deficiencies have been linked to depression, dementia, mood changes, attention deficit hyperactivity disorder (ADHD), memory loss and visual problems .

Beyond the cardio-protective effects of Omega 3s, EPA is believed to be beneficial for many autoimmune and inflammatory disorders including arthritis, asthma, inflammatory bowel disease, systemic lupus erythematosus and psoriasis
.
There are also several psychotherapeutic mechanisms of action that occur in the presence of this essential fatty acid. There are several studies that have shown a link  between low seafood intake to major depression, postpartum depression and schizophrenia, as well as to the severity of depressive symptoms. Although research in this  area is somewhat limited, EPA has at this point at least shown to improve symptoms of schizophrenia and depression and increase remission time in bipolar disorder.

D Alpha Tocopherol is a fat soluble vitamin and potent antioxidant. Not only does it have a powerful effect on the brain, it can help to protect against the harmful effects of  free radicals, encourage recovery, ward off heart disease and support the immune system. In addition to the benefits described above, vitamin E has been added to this  balanced blend of Omega oils because fish oils oxidise very easily and can therefore add to the oxidant stress on the body. An increased intake of vitamin E can counteract this effect.