NaturaC is a unique whole food (food based) source of vitamin C, derived from some of nature’s richest sources of this essential vitamin and antioxidant. As well as  providing vitamin C, it is packed with a host of other natural vitamins, minerals, antioxidants, bioflavonoids, pectins, essential oils, lycopene, carotenoids, plant sterols,  catechins, polyphenolics and other phyto-nutrients. Gentle and non-acidic – no ascorbic acid! 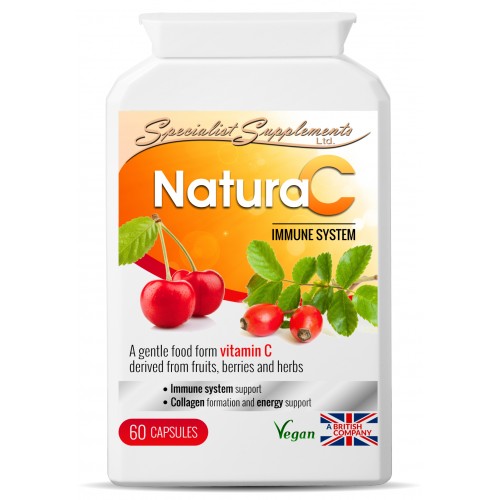 Easily Recognised By The Body For Maximum Absorption

The human body struggles to recognise synthetic substances, and this includes vitamins. It is best able to process and assimilate nutrients from natural whole foods. However, as food quality declines due to (for example) mass production, the incidence of multiple micro-nutrient depletion continues to increase, along with associated  ailments. Food form supplements offer a convenient and effective means of topping up on vitamin and mineral intake, because they present nutrients in a form that is as  close as possible to the foods where those micro-nutrients naturally occur.

NaturaC is a combination, food state vitamin C supplement, derived from some of nature’s richest sources of this essential vitamin and antioxidant: Acerola cherries, rosehips, blackcurrants, parsley leaf and elderberries.

The natural food ingredients are more easily recognised by the body, facilitating maximum digestion, absorption and utilisation. The vitamin C is retained for longer; not rapidly eliminated. 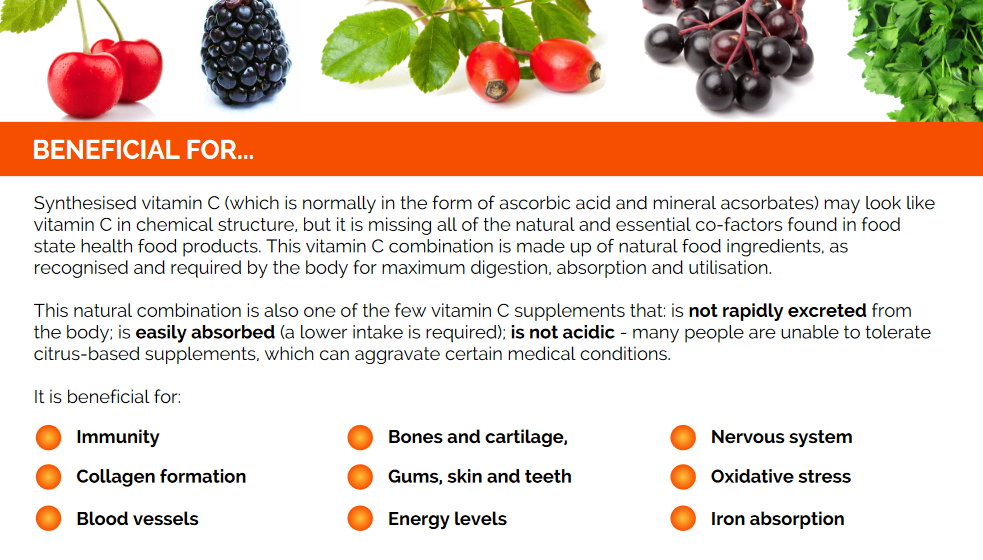 Acerola cherries are known as superfruits, due to their excellent nutritional value and exceptionally high vitamin C content. Vitamin C is essential for the growth and repair  of cells and for a strong immune system. Acerola cherries provide a naturally bio-available and powerful source of vitamin C, which is fully utilised by the body – unlike  synthetic ascorbic acid, which is sold as vitamin C. By way of a comparison of vitamin C content with other fruits, 1 small acerola cherry contains around 80mg of vitamin C – this is 30 times the amount found in oranges (of the same weight). These cherries possess an amazing array of nutrients, including potent antioxidants . In fact, researchers have identified nearly 150 nutritive constituents , which include bioflavonoids, proteins, mineral salts, iron, calcium and phosphorus. This undoubtedly makes acerola  cherries one of the most nutritious fruits known to us.

Also considered to be superfruits due to their wide array of nutrients, blackcurrants were used during World War 2 as a replacement for oranges and other fruits rich in  vitamin C (as they were difficult to source in the UK at that time). These berries are extraordinarily rich in vitamin C and are actually far superior to navel oranges –  containing more than three times as much of this powerful antioxidant. They also contain a good amount of calcium, potassium, phosphorus, iron, phyto-nutrients , vitamin  E and other antioxidants, including anthocyanins – a type of polyphenol. Blackcurrants are a great energy food and the seeds are rich in unsaturated fatty acids . They can  also help to prevent joint inflammation, eye strain and urinary infections.
A recent scientific study revealed that the natural chemicals and compounds found in blackcurrants may help to balance the impact that exercise can have on the body.  Researchers in New Zealand also uncovered a compound, which may help to improve breathing in some types of asthma. British scientists are now investigating how blackcurrants may hold the key in helping to slow the progression of Alzheimer’s.

Rosehips are red fruits found on roses. They are a great source of vitamin C and bioflavonoids . There is as much vitamin C in a cup of rosehip pulp as in 40 oranges!  Vitamins A, B1-3 and K are also present. The bioflavonoids, present in the pulp and the rind of the fruits, exert a synergic action to vitamin C, enhancing its absorption rate.  From a health perspective, rosehips are best known for their high content of bio-available vitamin C . There is approximately 1,700mg of vitamin C in 100g of dried  rosehip.Studies show that rosehips may reduce the symptoms of osteoarthritisand help sore, achy joints to function better. This fruit is certainly no stranger to the world of  alternative medicine and could be described as a nutritional superstar with its high iron and vitamin content. It has an antioxidant potential even greater than that of  blueberries!

A highly nutritious member of the umbelliferous vegetable family, parsley has many health benefits and a host of nutrients, such as vitamins A, C and E, bioflavonoids, iron,  folic acid, volatile oils, coumarins, flavonoids, chlorophyll and other powerful antioxidants and phyto-nutrients
.
Parsley contains more vitamin C than any other culinary vegetable, i.e. approximately three times as much as that found in an orange and about the same amount as blackcurrants. Its iron content is high (around twice as much as spinach). It is also a good source of manganese, calcium and potassium. Raw parsley and juice is used to  cleanse the blood , dissolve the sticky deposits in veins, help maintain elasticity of blood vessels, help break down small kidney stones and gallstones and as a natural  breath freshener and diuretic
.

Elderberries are rich in vitamins A and B, flavonoids and potassium, but they are most notable because they contain more vitamin C than any other traditional fruits (except  for blackcurrants and rosehips)! Research indicates that they promote disease resistance , which explains their traditional use in connection with the treatment of colds,  viral infections and upper respiratory conditions (including asthma). They are also said to help lower cholesterol, improve vision, support heart health, improve diabetes symptoms, improve digestion, alleviate muscle aches, relieve arthritis symptoms, act as a mild laxative and diuretic and support immunity, In fact, anthocyanins found in  elderberries have more antioxidant capacity than either vitamin E or vitamin C! These potent antioxidants enhance immune function by boosting the production of cytokines  – proteins that act as “messengers” in the immune system to help regulate immune response.