Nat-Lax TNT is a fast-acting colon cleanser, designed for the chronically constipated in need of strong treatment for a blocked bowel. Purgatives have been combined with carminatives to prevent griping.

Originally based on a Dr. John R. Christopher formula, this tried and tested combination of active ingredients is known as the ultimate herbal laxative. 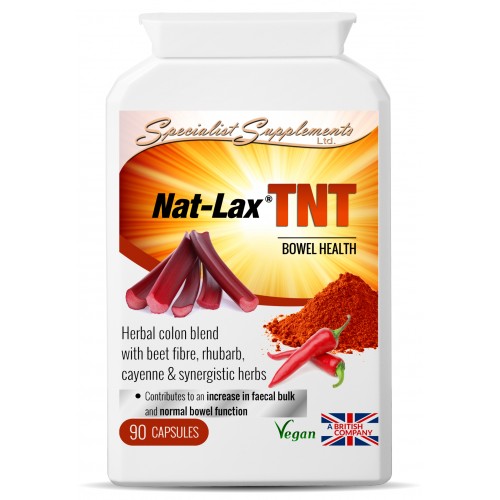 As such, this source of fibre may have a beneficial physiological effect for people who want to improve or maintain a normal bowel function.

It is also a powerful intestinal cleanser, which will “blast loose” residual intestinal congestion and get any bowel cleanse programme off to a good start. 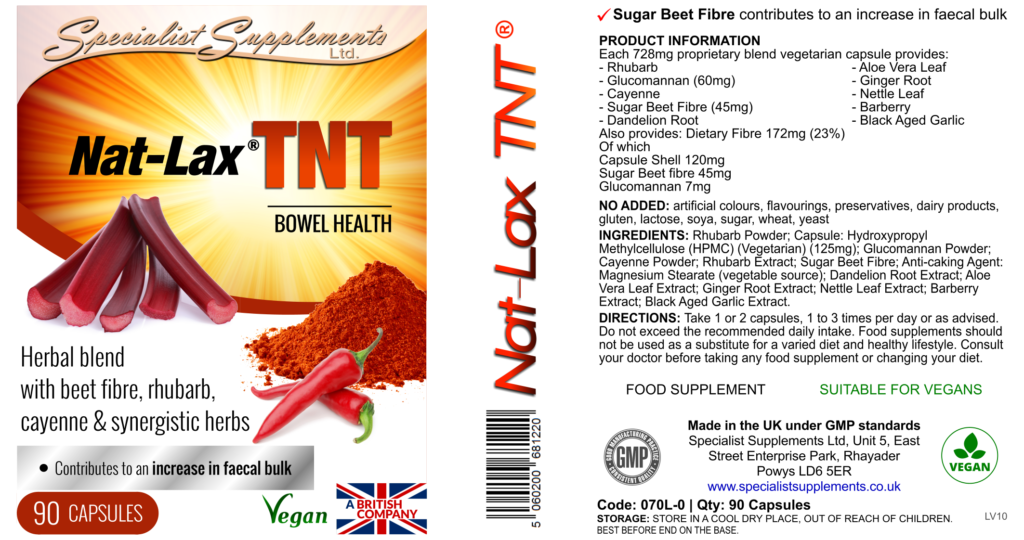 Rhubarb is particularly effective at interacting with the digestive system. It contains anthraquinones, including rhein and emodin and their glycosides (e.g. glucorhein), which impart cathartic and laxative properties. It is therefore very useful as a cathartic in case of constipation. It is a naturally strong herbal laxative, astringent-bitter, gastric stimulant, anti-inflammatory, stomachic, tonic and anti-septic. Also used for disorders of the liver, gallbladder and stomach.

Glucomannan is a water-soluble dietary fibre that has shown to be effective as a bulk-forming laxative. It is derived from konjac root (Amorphophallus konjac) and is particularly effective in the treatment of constipation. It has also been used in the treatment of diverticular disease – a preliminary clinical trial found that approximately one-third to one half of people with the disease had reduced symptoms after taking glucommanan.

Regarded by most herbalists as the purest and safest stimulant known. Cayenne opens up every tissue in the body to help increase the flow of blood. It is also used in the treatment of poor digestion and to increase gastrointestinal secretions. Acts as an anti-spasmodic for relief of pain, as well as a carminative.

This fibre has been included in the formula because it has been scientifically proven to contribute to an increase in faecal bulk in two ways: the insoluble components of the fibre increase faecal bulk by absorbing water in the large intestine, while the soluble components are fermented by bacteria in the large intestine leading to an increase in bacterial mass. As such, this source of fibre may have a beneficial physiological effect for people who want to improve or maintain a normal bowel function.

Among other things, dandelion root and other plants of the dandelion have been used as a gentle laxative, a digestive aid, to treat liver and kidney problems and to relieve inflammation, boils, fever and diarrhoea. Dandelion root is also known to stimulate the appetite and promote digestion. Aloe vera: Aloe vera contains chloride, which eases the process of bowel release by increasing the water level in the stool. Its laxative effect is also derived from its inner skin in the form of a yellow, bitter liquid called aloin.
This substance, when left to dry, turns into powder that is used to create laxatives. Aloe contains compounds called anthraquinones, including aloin, aloe-emodin, barbaloin and aloectic acid. Together, these compounds provide powerful relief for constipation.

Alleviates occasional gas, bloating and nausea. Ginger is known as a hot bitter herb, which promotes gastric acidity and aids in digestion. It is used for many stomach conditions as it has anti-inflammatory, carminative, anti-spasmodic, expectorant (increases bronchial mucous), vasodilator and circulatory stimulant properties. It is also used to promote gastric secretions and in cases of achlorhydria (absence or reduction of hydrochloric acid in stomach juices).

This herb is high in chlorophyll, vitamins (including vitamin C), serotonin, histamine, acetyl-choline, minerals (including iron), calcium, silica and a range of other cleansing and protective nutrients. This means that nettles are a great tonic for those feeling run down or tired, as they rebuild and cleanse the system (including your liver and blood). A lesser-known effect of nettle leaf is its ability to gently stimulate the bowels and also act as a diuretic.

Technically referred to as Berberis vulgaris, this bark contains an alkaloid known as berberine and supports liver, gallbladder, spleen and bowel function. It also has an anti-septic and anti-bacterial effect when taken orally. It is useful against dysbiosis, stimulates bile flow, eases liver congestion, is ideal for an inflamed gallbladder and also for  intestinal inflammation. It acts as a spleen and pancreas tonic.

Garlic has a wide range of beneficial properties, including anti-bacterial, anti-parasitic, anti-spasmodic, anti-dyspeptic, anti-blood-clotting, cholesterol-lowering, triglyceride-lowering and blood pressure-lowering. It has been used to treat everything from dysentery, typhoid and cholera, to bacterial food poisoning and intestinal worms. It helps to heal the bowel with its anti-bacterial actions and is used as a cholagogue to help stimulate the discharge of bile