MENOstage is a traditional herbal combination, designed to help relieve symptoms associated with premenstrual syndrome, hormonal imbalance and the menopause.

It contains a specially formulated blend of most of the well-known women’s herbs (including red clover, pfaffia, wild yam and sage leaf), as well as nutrients that have a balancing effect on the body and promote a feeling of vitality and well-being (such as Siberian ginseng, soya isoflavones, vitamin B6 and zinc citrate). 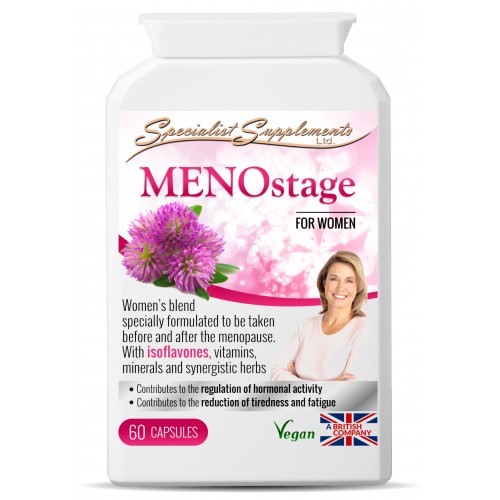 This gentle and completely natural helper is a favourite amongst female customers, not least because it does not contain hormones, such as those found in Hormone Replacement Therapy (HRT) drugs. Ideal support before, during and after difficult monthly cycles, as well as during the menopause.

1 capsule to be taken 2 – 3 times per day, with or without food or as advised by a health practitioner. 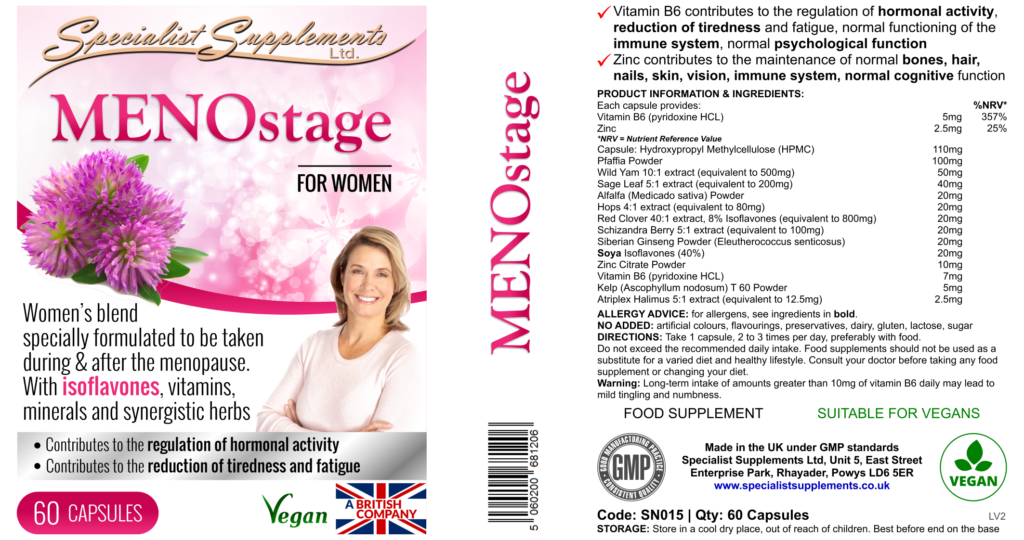 Isoflavones are oestrogen-like compounds that can help to modulate the effects of the stronger oestrogen and testosterone produced by the body. Four trials have now  shown that isoflavones, found in high levels in both soya and red clover, can halve the incidence and severity of hot flushes, as well as help to relieve the other symptoms  of menopause, such as irritability and vaginal dryness.

The starting material in the manufacture of “the Pill”, the root and bulb of wild yam contain the chemical diosgenin, which can be made into various steroids (such as  oestrogen and dehydroepiandrosterone (DHEA)). As such, it is often used as a natural alternative to oestrogen therapy, for vaginal dryness in older women, for PMS  (premenstrual syndrome), menstrual cramps, weak bones (osteoporosis), low energy levels and sex drive. Some women even apply wild yam creams to the skin to reduce  menopausal symptoms such as hot flashes.

Sage leaf contains diterpene bitters, volatile oil, flavonoids and rosmarinic acid. It has a tonic effect on the female reproductive system and is recommended for irregular  menstruation and menstrual cramps. As a result of its oestrogenic effect, it has also been shown to be effective in alleviating the following symptoms of menopause,  including anxiety, fatigue, night sweats, hot flashes and mood swings.

Pffafia (and also known as Brazilian ginseng, Suma and Paratudo) has been known to Amazon Indians for thousands of years and extensively studied by American and  Japanese scientists – it is very popular with women going through the menopause or PMS in these countries, to relieve symptoms of hormonal imbalance. Pffafia has been  documented to contain a significant amount of plant sterols, which are thought to have oestrogenic properties or activities (most notably, sitosterol and stigmasterol). It is  also an adaptogen and restorative tonic.

Wu-Wei-Tzu, known as schisandra / schizandra in the West, is an adaptogen that can fortify and strengthen the body, enhancing resistance to disease and stress.

Hops contain natural plant oestrogens, volatile oil and resin. In fact, scientists have now discovered that the hops plant may contain one of the most powerful  phytoestrogens ever identified. This potent compound – known as 8-prenylnaringenin or 8-PN – effectively combats menopausal complaints and shows promise in protecting against bone loss and heart disease.

Alfalfa is a nutrient-dense food, rich in chlorophyll, along with vitamins (such as A, B6 and 12, C, D, E, K and P) and minerals (including magnesium, calcium, phosphorous  and potassium). It also provides a rich source of alkaloids, isoflavones, coumarins, sterols and essential enzymes. As such, and because it is cooling, sweet, astringent  legume, alfalfa has been used to relieve menopause symptoms, including hot flashes and night sweats.

Ginseng is a tonic herb, which can support health and well-being. As an adaptogen it helps the body to perform at optimum levels and counter the ill-effects of stress. A rich  ource of phyto-nutrients and eleutherosides, ginseng is also used by many women to counteract the symptoms of menopause,.

Also known as Mediterranean saltbush, Atriplex halimus is a nutritious plant, high in protein, as well as vitamins (C, A and D) and minerals (such as chromium).

Sea kelp is a natural source of vitamins A, B1, B2, C, D and E, as well as minerals including zinc, iodine, magnesium, iron, potassium, copper and calcium. In fact it contains the highest natural concentration of calcium of any food – 10 times more than milk. It supports the thyroid gland, which is a key sex gland stimulator and can help to relieve  menopausal symptoms, such as hot flashes, weight gain, moodiness and menopausal tension.