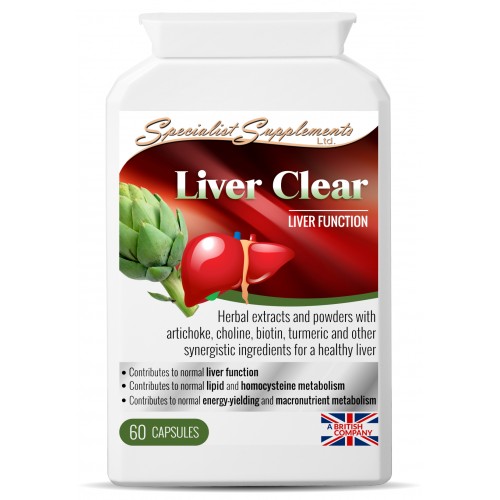 n particular, the ingredients in this comprehensive food supplement help to cleanse a congested liver and gallbladder and support cell repair and protection. It has been formulated to stimulate, flush, cleanse and protect these two important organs. If you thought milk thistle worked well, this formula will “blitz” internal congestion and toxins. 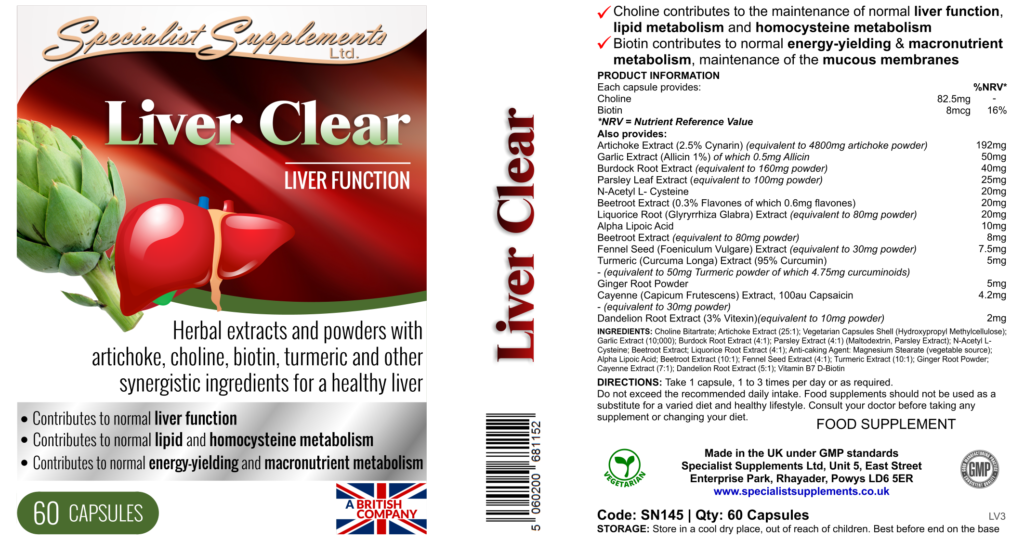 Choline is a water-soluble vitamin. Some animals are unable to produce choline, but must consume it through their diet to remain healthy. Humans, however, make choline  in the liver, or it may be consumed from the diet. It has been demonstrated that both de novo production and dietary consumption are necessary, as humans eating diets  lacking choline develop fatty liver, liver damage and muscle damage. Choline contributes to normal homocysteine metabolism, normal lipid metabolism and to the  maintenance of normal liver function.

Biotin is a water-soluble B-vitamin, also called vitamin B7 and formerly known as vitamin H or coenzyme R. It is necessary for cell growth, the production of fatty acids and  the metabolism of fats and amino acids. It also assists in various metabolic reactions involving the transfer of carbon dioxide and may be helpful in maintaining a steady  blood sugar level. A wide range of foods contain biotin, and intestinal bacteria synthesize it, which is then absorbed by the host. Biotin contributes to normal energy-yielding  metabolism, normal functioning of the nervous system, normal macronutrient metabolism, normal psychological function, normal hair and skin and the maintenance of normal mucous membranes.

An ancient herbal treatment used to promote a healthy liver, efficient digestive system and healthy cholesterol levels. The extract contains the active ingredient, luteolin,  and the antioxidants caffeic acid, cynarin and cholorgenic acid. These all act to protect liver cells from damage and, at the same time, stimulate the production of bile acid  into the digestive tract. This breaks down fats and has an effect on lowering high cholesterol levels and triglycerides.
NOTE: Cynarin is the close botanical cousin of the herb milk thistle (which is well-known for its positive effects on the liver, but has now been re-classified as “medicinal”).  Studies have shown that cynarin can actually reduce elevated triglycerides, lower total serum levels and at the same time increase beneficial HDL levels. It therefore offers  ideal support for the prevention of heart disease, while simultaneously cleansing liver cells.

One of the oldest known natural remedies, garlic has many beneficial properties. For example, it is an anti-bacterial, anti-parasitic, anti-spasmodic and anti-dyspeptic, and  can have cholesterol lowering, triglyceride lowering and blood pressure lowering actions. Historically, it has been used to treat everything from dysentery, typhoid and  cholera, to bacterial food poisoning, worms, colds and flu. It helps to heal the bowel with its anti-bacterial actions and is also used as a cholagogue, to stimulate bile.

This is another well-known and powerful blood purifier and potent detoxification herb, which is often partnered with dandelion for best effect. Toxins that have been  displaced by the burdock will need to be quickly eliminated by dandelion and the other herbs in this formula, which have been carefully chosen to partner burdock in its  clearing actions. As a potent lymph and skin cleanser, burdock forces the body to eliminate waste products, thereby clearing the skin, bloodstream and other organs and  tissues of toxins. Its antibiotic-like actions will also assist in dealing with toxins circulating in the system. Uses: A hepatic (assists the liver in its functions and promotes the flow of bile), hepatoprotective, cholesterol reducer and general body detoxifier. Also a diuretic and can help with skin problems such as eczema, psoriasis and dermatitis.

This is a natural anti-spasmodic, a natural diuretic, a good expectorant and can be used for coughs and asthma. It also helps to relieve gas. The green leaves contain chlorophyll – a powerful phyto-chemical, detoxifier and cleanser. Parsley helps to cleanse the liver, kidneys (breaks down gallstones and kidney stones) and bloodstream.

This is an amino acid and precursor to glutathione, the body’s most abundant antioxidant found in virtually every cell. Studies show that it can protect the body against  ailments such as bronchitis, asthma, emphysema and sinusitis. Animal studies have also shown that NAC can prevent damaging changes to DNA caused by the dangerous  chemicals in cigarette smoke. For those who smoke or have smoked, this is a must-take supplement. NAC is produced in living organisms from the amino acid cysteine and  is a sulphur-containing amino acid derivative found naturally in foods, making it a powerful antioxidant. It works by helping to eliminate free radicals and heavy metals from  the body and in turn improves cellular health. NAC helps the body to neutralise toxins and is a chelator of heavy metals (such as mercury from dental amalgam fillings,  cadmium and lead from paint and cigarette smoke). Toxic metals can accumulate in the body over time and continue to cause free radical damage as long as they remain.  NAC can also help to prevent damage to the liver caused from overuse of acetaminophen (Tylenol) and is the standard medical treatment for acetaminophen overdose.The sulphur content has also been linked to enhanced resistance to viral infections. Athletes have found that it helps them recover more quickly after training sessions.
NOTE:
do not use NAC if peptic ulcers are present.

A highly nourishing and cleansing vegetable, as well as a rich source of potent antioxidants and other nutrients, including dietary nitrate, selenium, magnesium, iron,  sodium, potassium, vitamin C and betaine (which is important for cardiovascular health). It functions by acting with other nutrients to reduce the concentration of  homocysteine, which can be harmful to blood vessels and thus contribute to the development of heart disease, stroke and peripheral vascular disease. Beetroot is an  effective natural cleanser of the liver, biliary system and gallbladder, and offers support for high energy levels and vitality. It is also useful: in cases of iron deficiency  anaemia for helping the liver to break down stored fats against cellulite in reducing hardening and blockage of arteries (atherosclerosis) for lowering blood pressure (this  effect is attributed to the high dietary nitrate content of beetroot – a nutrient which acts an oxygen catalyser).

Glycyrrhizin is the main active ingredient in liquorice, which gives it its distinctive sweet taste. It has anti-inflammatory, anti-viral and anti-allergic properties. It is soothing to  peptic ulcers and can assist with kidney complaints. It stimulates two steroids, cortisone and aldosterone (which help to reduce inflammation). Glycyrrhizin inhibits liver cell  injury caused by many chemicals and is used in the treatment of chronic hepatitis, hepatitis B and cirrhosis in Japan. It also inhibits the growth of several DNA and RNA  viruses, inactivating herpes simplex virus particles irreversibly. Also used for adrenal exhaustion.
Caution:
not to be used in cases of untreated high blood pressure, due to its effect on aldosterone.

Lipoic acid is known as the “universal antioxidant”. It is a vitamin-like substance naturally produced in the body and plays a unique role in defending it against free radical  damage. More than 20 years ago, Burton Berkson, M.D. discovered that lipoic acid could cure a fatal liver disease caused by the ingestion of the highly poisonous Amanita  mushrooms. The liver damage caused by the free radicals present in these mushrooms destroys liver cells, and 90% of people who eat them will die. However, intake of  lipoic acid cured these patients, confirming its powerful liver cleaning and protective properties. ALA also helps to stabalise blood sugar levels and insulin resistance – a  common complaint in middle-aged men and women – which can lead to a range of serious health problems. Athletes report that they experience far less muscle soreness  following exercise, when taking this compound.

These seeds act as a gentle warming agent for delicate stomachs. Fennel is also a carminative, +aromatic, anti-spasmodic, digestive and gut soother, which has mild  stimulant and anti-inflammatory properties.

The yellow pigment in turmeric, called curcumin, is a powerful antioxidant shown to reduce free radical damage in the body. It also reduces inflammation in cases of  rheumatoid arthritis, helps to lower high blood cholesterol levels and helps to prevent the formation of blood clots, which could lead to heart disease and strokes. Curcumin  has long been used in ayurvedic medicine as a blood purifier, stomachic, carminative, bile stimulant and, more particularly, to strengthen liver function and treat hepatitis C  and gallbladder disease. Recently, it has also been found to be effective in preventing alcohol-related liver diseases, of which there are three main varieties:
Fatty liver: in which fat builds up on the hepatocytes (liver cells).
Hepatitis: which is characterized by liver dysfunction and complicated by jaundice and other conditions.
Cirrhosis: in which nodules developing on the liver can lead to end-stage liver disease and death.

A warming herb, which helps to ensure that toxins are kept circulating until properly eliminated. It is also calming to the stomach and can help combat feelings of nausea,  which may be produced during the detox process. Its actions include anti-inflammatory, carminative, anti-spasmodic, expectorant, vasodilator, circulatory system stimulant and anti-cholesterol. Ginger helps to alleviate occasional gas and bloating and is known as a ‘hot bitter’ herb which promotes gastric acidity, gastric secretions and aids in  digestion. As such, it is used for a range of stomach conditions. For example, it is used for flatulence and in cases of achlorhydria (absence or reduction of hydrochloric  acid in stomach juices).

Regarded by herbalists as the purest and safest stimulant, cayenne opens up tissues throughout the body to an increased flow of blood and stimulates the oxygenation of  cells and organs. It invigorates the circulatory system and the heart to work more efficiently and thereby assists the effective movement of toxins out of the body. It also serves as a carrier for the other herbs in this formula – so that they arrive quickly and effectively to their particular areas of work.

The leaves and roots of the dandelion have been used for centuries to treat liver, gallbladder, kidney and joint problems. It is considered to be a blood purifier and is widely  used to treat poor digestion, water retention and diseases of the liver, such as hepatitis. Dandelion is a source of potassium, sodium, calcium, phosphorus and iron. The leaves are a richer source of vitamin A than carrots and also contain good levels of vitamins B, C and D. The root contains bitter glycosides, tannins, triterpenes, sterols,  volatile oil, choline, asparagin and inulin. Dandelion is also rich in lecithin, believed to protect the liver against cirrhosis.
Actions:
Diuretic, hepatic, cholagogue, anti-rheumatic, laxative, tonic and bitter. It is a general stimulant to the system, especially to the urinary organs, and is primarily used in  connection with kidney and liver disorders. Increases bile production in the gallbladder and bile flow from the liver. This makes dandelion a great tonic for people with  sluggish liver function due to alcohol abuse or poor diet. The increase in bile flow can help improve fat (including cholesterol) metabolism in the body and it also cleanses  the blood